Your guide through cinema and fashion…

Let me start by telling you a dialogue from the film which made no sense to me. I mean kyu daala, kya bola, kyu bola, kya socha? Matlab kya? So here it is:

Keep thinking what this means and when you figure it out, leave your philosophies in the comments below. For now, here is a review of the entire film, except this dialogue:

I am very sorry, but Radhika Apte aside, I have problems with almost every aspect of Pad Man. And my main problem with each of these aspects is that they are elitist, ignorant maybe. The film does try to address a problem, if not solve it, but seems like director and writer R Balki and co-writer Swanand Kirkire have wanted to make a film for people of privilege by choosing a not so privileged topic.

Also, kudos to Twinkle Khanna for “conceptualizing” the story. I am very sorry Miss Khanna but you did not “conceptualize” the story. Yes, you did write a short story on which the film is based but that story wasn’t fiction. You had taken the real-life account of Padmashree Arunachalam Muruganantham and made it into a story. So if you take credits for ‘conceptualizing’ a real-life story, that is not literally conceptualizing and secondly, you seem to want people to forget that a certain ‘real-man’ exists whose life story you have taken, by, (in simple words) buying him off. And in this process, Muruganantham becomes the third important person after Khanna’s story and Kumar’s film. All of us know what the story is, but briefly, Lakshmikant Chauhan (Akshay Kumar) is obsessive about his wife and sisters using a pad instead of a cloth but since the pads available in the market are very expensive, he decides to make them himself. That is just the beginning of the problems because he is a man and is not supposed to discuss a woman’s monthly problem with her. The story of Arunachalam Muruganantham seems heroic, but that of R Balki’s Pad Man seems plain. And that is where the film falls. Balki had tried to break stereotypes with his last, Ki & Ka, but that went terribly wrong. He attempts the same again, challenging societal norms, gender disparity, class divide and even though he doesn’t fail, there isn’t an impact he sets. Probably the only impact of Pad Man is Lakshmi’s final speech and the brilliant performance by Radhika Apte.

We will get to praising Apte later, but first, let’s talk about Akshay Kumar, Lakshmi and why the two just don’t seem to merge. We are given this man, who lives in a village in Madhya Pradesh and wants to fix things. Now, Lakshmi is supposed to be born and brought up here, but neither does he dress like a local-ite, nor does he speak and act like them. Roaming around in tight-Khaki shirts, in almost every single frame of the film is something I couldn’t buy into. I am not saying that Kumar hasn’t performed well. He has, but he, or perhaps maybe even Balki, just doesn’t let go of the fact that Kumar is a superstar. What was required here was an earthy feel in the man who leads the narrative. And also, a major flaw Balki and ‘conceptualizer’ (I am loving this word), Miss Khanna made while writing/conceptualizing Lakshmi was that there always is a solution just when there is a problem. Like, right in the next scene. In one instance, Lakshmi needs to pay money to someone from whom he had borrowed and just when that someone comes in to take back his money, (pay attention) a car comes in, the driver of the hotel where Sonam Kapoor was staying steps out and says to Lakshmi, “Arey tum phone khareed lo na. Madam humko phone kar rahi hai.” And then Kapoor announces on the phone that there is a Rupees 2 lakh worth contest to be held in Delhi in a couple of days. How convenient no? And this doesn’t happen just once. Ek baar mei maza kahan hai? 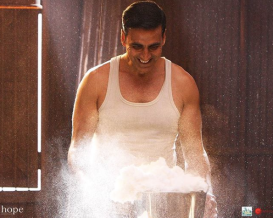 Another flaw – Sonam Kapoor. When you watch the film, Sonam Kapoor’s Pari is, in fact, the only character that fits into the elite, ignorant and urban narrative. The film was supposed to create awareness and I really hope that I am proved wrong and it does stir intellect in men and women across India, but it is made in a way that might not spread awareness but will definitely earn crores. And that is when you see a parallel between the narrative and Sonam Kapoor’s Pari. Sorry again, but this character is perhaps one of the most redundant characters I have seen in a while, and Kapoor gives Pari her one-dimensional best! After a film and performance like Neerja, this is the kind of role you choose? And, please explain the love angle between Kapoor and Kumar, Mr Balki? Am I missing something here? Did I blink my eyes for too long at once to have missed something? Oh, did I mention Pari is a tabla player? Why you ask? Hehehhehheheh! 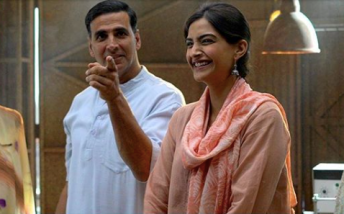 Now, my favorite, Radhika Apte! Why is this woman so emotive? There were incidents in the film when I could feel the pain, physical and emotional, that Apte’s Gayatri Chauhan was going through. I have always been an admirer of Apte’s talent and finesse. But this time around, she blew off my mind! Gayatri is a normal woman – all she wants is a happy family and for her husband to accept the fact that for those 5 days of the month, she won’t enter the house and sleep outside in the balcony, like all the other women in the village. Yeh rivaz hai, she says. She is in love with Lakshmi; he is her man. But even then, she believes that it is better she dies of a disease caused by menstrual (un)hygiene rather than living in shame by discussing her auraton wali problem with her man. She, herself, is an anti-feminist character. Apte goes down to that level. Not for a second in the film will you think of Apte as Apte. She is Gayatri for you and will remain the same even after the end credits roll. She is possibly the reason why so many people would be able to sit through this film. And of course there is Akshay Kumar’s fandom but Apte stands apart and is probably Kumar’s first heroine to have overshadowed him. If Balki wrote and directed and if Miss Khanna ‘conceptualized’ the other two characters like they did for Gayatri, this film would have been different, better! 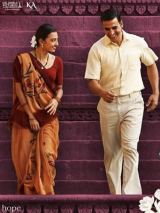 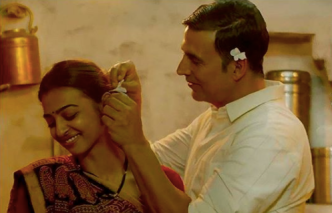 All in all, Pad Man will definitely earn a lot of money. But when you make a film on a social cause, wanting to bring about a change, capitalism should be the last thing on your mind. Again, I hope I am proved wrong and the film does wonders, socially too, but I see very little of the same happening. This, of course, is a step ahead but this wasn’t the best way to do it, I feel. I mean, Arunachalam Muruganantham is a man who left behind concepts of ‘money’ in order to make the world a better place to live in, and even though that part is loudly said in the film, looks like ‘Conceptualizer’ Khanna is a subtle emotion of Producer Khanna. Also, the film is too LOUD an attempt at feminism. Wahi, Ki & Ka wali problem. Same!

Like Loading…
← People will always be curious about single women, says Tabu
→ Not Ranbir Kapoor, but this man has Alia Bhatt’s attention?