Parmanu is based on the nuclear test conducted by Indian Army in Pokhran, Rajasthan in 1998. But what we get to see is a very fictionalised version of the same. What happens in the movie is very real, but not everything is given to us to watch. It is not a historical film, talking in detail about the proceedings of the nuclear test. It tells us what co-writers, Saiwyn Quadras and Sanyuktha Chawla Sheikh (of Neerja) and director Abhishek Sharma want us to know, and nothing more. I would have definitely wanted to know a lot more of the backstory and facts, but I am not complaining much, because Parmanu is a very well written film with decent performances.

And my favourite part of this entire process of filmmaking, for this film, is the editing. I haven’t seen such crisp editing of a film in a while. There is no this-and-that, here-and-there. Everything is straight to the point. I did get a little bored in the first 15 minutes of the film, Sharma was setting up, but as that time passed, I started having a good time.

John Abraham’s Ashwat Raina’s dad had dreamt that his son would be an Army Officer, but since that didn’t happen, Raina is always on the low. But one day his wife (played by the lovely Anuja Sathe) tells him:

And then he realises that he can do it. After a failed mission, he is later given an opportunity to form a new team and re-do those failed nuclear tests. Now, we know that the tests were successfully conducted back in 1998. So that is not the suspense. But how Sharma takes us to the final climax is. And, very effiv=ciently, he succeeds in keeping you hooked on.

The other characters of Yudishthir, Ajrun and the other Pandava brothers (only names), play their parts well, but (1) they aren’t given much to do, and, (2) most of them are written as stereotypes. You see Diana Penty moving around in Army uniform, while she delivers dialogues like, “The eagle has landed,” referring to a person. And also, how does she walk into a desert, stand and work there for hours at length and still has perfect hair and make-up? That’s unbelievable to another level. 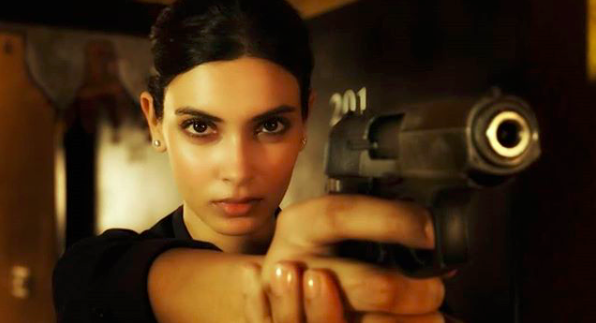 Now, talking about John Abraham, I have liked a John Abraham performance after a very long time. I don’t know when I last saw him perform like this last. Though his expressions are limited. But, for Parmanu, somehow, it works. Also credits to him for believing in the script and investing his own money, and to KriArj Entertainment for the same too.

All in all, Parmanu may not tell you the events as and how they happened, but it sure is a good film, with ample drama.

If I had to rate the film, I have decided I will start giving stars now, so here it is: