In Season Five of Koffee With Karan, Priyanka Chopra was Karan Johar’s guest all alone, but even then it was one of the best episodes of Johar’s chat show. In it, when Johar quizzed Chopra about a possible ring on the finger, the Bajirao Mastani actress had said: 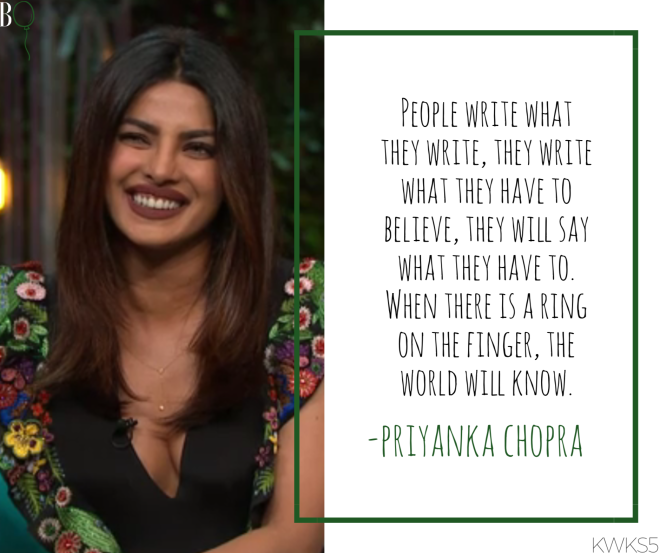 And now, when there is a ring on the finger, Chopra sadly can’t share the couch with her fiancé, Nick Jonas. The reason being that both the stars have recently signed a contract with a leading media and entertainment agency in New York which forbids them from talking to the media about their love or their engagement at present.

Uh-oh! We wish this contract was signed after Season Six of Koffee! And we also wonder who will PeeCee share the couch with? Will she even be on it this time?

Disha Patani (@dishapatani) taking ‘sun block’ literally…
Kartik Aaryan (@kartikaaryan) to star in Hansal Mehta’s (@hansalmehta) next, #CaptainIndia…
THIS! Each sticker on each “control” key shows you see no problem in the entire scenario and that you’re on the wrong side. Iconic movies/dialogues will come and go, but these are the battles we are to really fight. People on Twitter are really boasting about putting a Nana Patekar still from Welcome on their laptops, but what does this really mean for India’s #MeToo movement?
Parineeti Chopra’s (@parineetichopra) “Vijay, Hindi gaana” moment in London…
Loading Comments...
%d bloggers like this: