It’s episode nine, both Tara and Karan are in their individual scenes where tension is at it’s peak. Dressed in one of the most gorgeous red sarees I have ever set my eyes on, I see Tara Khanna (Sobhita Dhulipala) walk around her wedding anniversary party, and all I am hoping is for her to stop everyone around her from pretending – from pretending that this is a good life, that this is how real friends interact, and most importantly, that this is a beautiful marriage. Cut to Karan Mehra (Arjun Mathur), who is sitting across his ex-boyfriend from school, whom he has wronged. As they sipped on what seemed like Gin and Tonic to me, trying to cut the tension between them with sips of their drinks, all I wanted was for Karan to say that he was sorry. Whether Tara and Karan did what I was rooting for, or not, is for you to find out, but one thing I can assure you, Zoya Akhtar and Reema Kagti’s Made In Heaven is a one of a kind show, that you possibly cannot miss watching.

In search of lives that they otherwise cannot, possibly, have, Tara and Karan start Made In Heaven, a wedding planning company. Maybe, the motive to choose to start a wedding planning company was to show the grandeur of Indian Weddings, but what I saw, hidden within layers, was that both Tara and Karan choose a career in an area, which can never entirely be theirs. She is in an unhappy marriage, where the husband (Adil, played by Jim Sarbh) is cheating on her. And he is a closeted gay, living in a very unforgiving country in the times before Section 377 of the Indian Penal Code was striked off. Both Tara and Karan know that a happy marriage is a distant dream for them, so here they are, arranging weddings of people, even solving problems of morality with each wedding they plan.

Created by Zoya Akhtar and Reema Kagti, and directed by Akhtar, Nitya Mehra, Prashant Nair and Alankrita Shrivastava, Made In Heaven is a story told in nine episodes, with each episode having a typical North Indian wedding. But each wedding has a ground of morality to fight, each episode talks about a social stigma – dowry, marriages of alliances, class hierarchy and many more. While these weddings come and go, and can get a little tedious after a few of them, even though they’re all wonderfully written episodes, what stays with you, by the end of episode nine is the mad hope that perhaps the makers of Made In Heaven had in them, to create something like this.

One cannot understate the importance of weddings in India. More than being almost a festival, weddings talk a lot about families, tradition, social status and much more. So when Priyanka’s (Shweta Tripathi) baraat refuses to enter her house without dowry, her father will agree to it. But when Priyanka finds out, will she agree to stay in this marriage? There is a lot that Made in Heaven talks about, and very beautifully. None of it seems like a facade. These are all stories told from the heart and it shows. It shows in the production design, in the casting, performances, direction, everything.

But where Made In Heaven wins the most is the casting and performances. From actors in cameos, to those in leading roles, they’re all too good. Shweta Tripathi, Rasika Dugal, Neena Gupta, Deepti Naval, Vinay Pathak, Vijay Raaz among others are my favourite actors in guest appearances. The wonderful Shashank Arora, who plays Kabir, the “main video guy” is a treat to look at. He shines the most in his scenes with Shivani Raghuvanshi, who plays Jaspreet Kaur, aka Jazz, and is a revelation. She is a simple girl from Dwarka, trying to make it big in an unfitting South Delhi world, and somewhere, you see a younger version of Tara in her too.

Kalki Koechlin and Jim Sarbh play second leads, Faiza and Adil – she is Tara’s best friend, he is her husband and together, they’re having an affair. Koechlin’s Faiza is the most underwritten character in the series, but she does with it the best she can. Sarbh’s Adil is a little underwritten too. No matter what goes wrong in his life, the solution, apparently, is making out. He goes from woman to woman without any remorse. When Natasha dumps him, he has Tara. When Tara gets too busy at work, there is Faiza. But Sarbh, being the raw talent that he is, does full justice to whatever he is given to play with.

Now, the standouts – Sobhita Dhulipala and Arjun Mathur. Dhulipala’s Tara hails from West Delhi. At first, she is an assistant, then she becomes a woman with a mission, then an entrepreneur and finally, a woman with her heart. We’re shown, by a way of flashbacks, that all Tara has ever wanted is to step into a fuller, elaborate life. And, by hook or crook, that’s what she does. A very well written character, Tara is complex. She’s not your girl next door. I wish I could see more of what went into making Tara the woman she is, but I am not complaining, especially because of what Dhulipala has done with her. She holds Tara with both her hands, crosses her heart and performs as if it’s her final act. She gives Tara the substance and lustre a character of that level required.

And my favourite, Arjun Mathur. What a brilliant find! Mathur has worked with Zoya Akhtar before (in Luck By Chance) and even in a short film directed by Mira Nair. So, technically, he’s not a “find” but Karan Mehra sure is his first leading character in the mainstream narrative. And he gives Karan all he can, and much more. Karan is a gay man living in India, a country that does not forgive anything it considers “unlawful” or “untraditional” or one of the stupid excuses we have been making against homosexuality. The writing of this character could have gone entirely wrong, by a way of stereotypes. But it doesn’t. The treatment of homosexuality could have been a farce, as in Shelly Chopra Dhar’s Ek Ladki Ko Dekha Toh Aisa Laga, and it could have been made fun of. But, that doesn’t happen. While ELKDTAL was scared of even using the word “lesbian”, Made In Heaven explores everything about homosexuality – it’s normalcy. Men and women who are homosexuals have the right to love, they express their feelings, they indulge in sex and this is all normal, and the entire series shows it as not just Karan’s normal, but as normal in the most normative sense of the term.

Coming back to Mathur – a genius find. He dives into Karan and brings every nuance of his to the table. Whether it’s in the scenes where he’s the happiest, or when in once scene, when he’s in a car and crying his heart out, Mathur makes Karan as real as possible. He gives Karan the edge he required, becomes a true friend of his character, holding his hand and walking him through and giving him a shoulder to cry on when needed. By playing Karan with such finesse, he proves that Arjun Mathur will be a name to reckon with and is certainly someone, who can single handedly hold an entire feature film on his shoulders. And I can say the same for Sobhita Dhulipala.

While I wait, with bated breath for the makers to announce a sequel, I still cannot get over one of the many geniuses of Made In Heaven – the fact that Tara and Karan are friends and not lovers. Of course I vouch for their friendship, but I’m not head over heels for it, like most people are, because platonic friendships exist in life, but I’m just happy that Tara and Karan’s story doesn’t not venture into the intricacies of love and celebrates the fact that there are many kinds of relationships that can exist between a boy and a girl…

Also, I need to hug Sobhita Dhulipala and Arjun Mathur, so if you’re reading this and know them, please hold them and say thank you, thank you for telling this story. 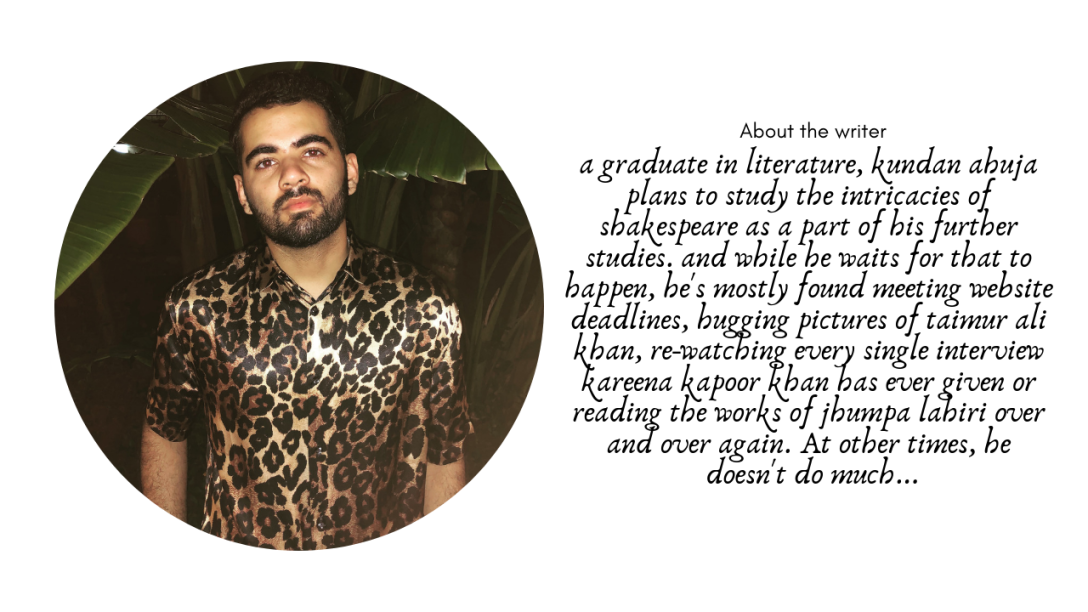 2 thoughts on “Made In Heaven: Brilliant writing, commendable performances”

Holy moly! @ranveersingh
Literally a goddess!
Wondering if Kajol (@kajol) and grace are synonyms 🤔 YES, they are!
Kajol (@kajol) looks effortlessly stunning in the colour of the season! What a minimal look, and yet so powerful ✨
Loading Comments...
%d bloggers like this: