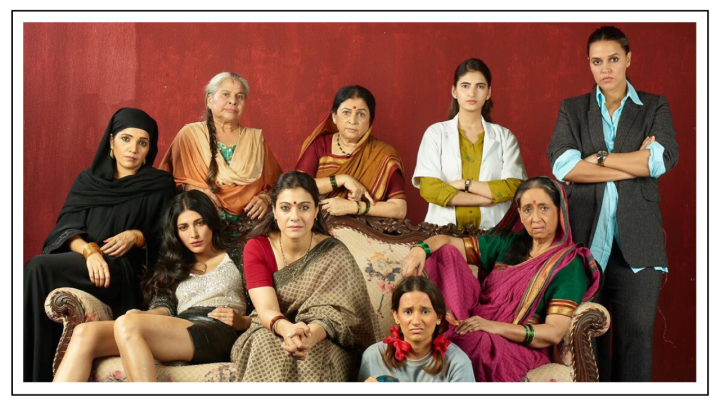 TW: This story contains mention of rape and assault.

Priyanka Banerjee’s Devi is a masterpiece! In just 13 minutes (the runtime) Devi captures so much, it’s beyond many of us. That she has a wonderful cast – Kajol, Shruti Haasan, Neha Dhupia, Neena Kulkarni, Mukta Bharva, Sandhya Mhatre, Rama Joshi, Shivani Raghuvanshi, and Yashashwini Dayama among others, is just an added benefit to her writing.

Devi is a story of sisterhood, of companionship, but what binds these women together is horror. All these women, from varied age groups, social and economic background are victims of assault. We often see this around us. Women bond over the fact that they have been groped (insert any form of assault) but is that something you ‘bond’ on? Of course not! Banerjee uses this common issue, that shouldn’t be so common in the first place, and tells the story of these very women who stay together in afterlife. One fine day, the bell rings and the women are discussing whether or not to take in the new entrant. There’s discussion and debate, someone says there’s no place, someone argues how many women, after all, can they allow in their ‘home’? Kajol’s Jyoti then tells them that this solidarity in inconvenience is better than living among demons. Have we, as humans, stooped so low that our women don’t look for a ‘good’ life but instead search for whatever available option as long as it’s not assault?

Devi’s biggest strength is the pauses it takes (we haven’t included many pictures). Watch out for the silences, the stares. Banerjee never focuses on the aftermath of assault (internally). There’s a mention of the horror, the pain, but her film talks about the state of women once they’re assaulted – they lead forgotten lives. They may be from anywhere, anything could’ve happened to them, but the truth is, in our country, women still don’t matter, no matter what you’ve achieved. As long as you’re a woman, you will be wrong. Neha Dhupia is dressed in formals, Kajol in a saree, Shruti Hassan in a dress – were they asking for it?

Devi may come across as a question mark if you don’t have the patience to wait and watch the climax. The person who has rang the bell is a young girl. We never see this girl’s face. Banerjee reminds us through this girl that this young child could be anyone, anyones daughters. Today parents are just thankful that it’s not their daughter. But at the end of the day, it’s someone’s daughter. The truth is, that it shouldn’t be!