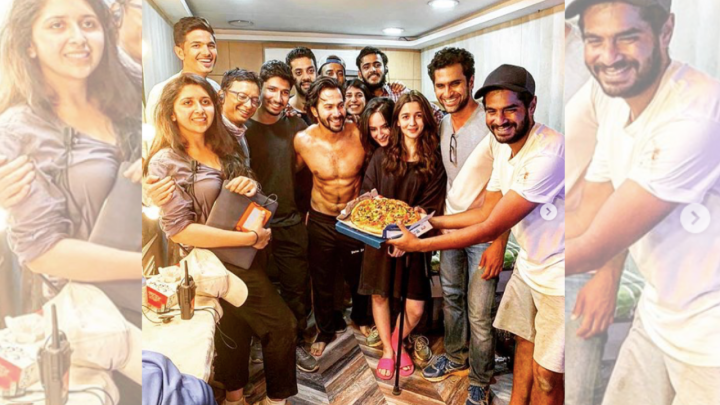 If you’ve been following Varun Dhawan on Instagram, you’d be aware of the fact that not only has he been severely working out as off late, owing to his upcoming film Kalank, but is also always teased by his team about the fact that while he can’t eat pizza because of his diet, they can. Yesterday Dhawan, along with Alia Bhatt, wrapped up the schedule film and guess what! There was pizza at the wrap up celebrations!

After finally getting done with his rigorous workouts and trainings, the Sui Dhaaga actor took to his Instagram account to put up a series of fun clicks from the party, smiling as he got to finally eat a slice.

This Bhatt-Dhawan duo are collaborating for their fourth film together, after Student of the Year, Humpty Sharma Ki Dulhania and Badrinath Ki Dulhania. This period drama, directed by Abhishek Varman also features Sanjay Dutt, Sonakshi Sinha, Madhuri Dixit Nene, Kunal Khemu and Aditya Roy Kapur. But what you possibly didn’t know about the film is that it was conceptualized by Karan Johar and his father Yash Johar fifteen years ago.

Produced by Karan Johar, Sajid Nadiadwala and Fox Star Studios, Kalank is expected to hit the big screens on April 19, 2019.

End of a crazy sched team #kalank. This has to be the most hard working team I have ever worked with. Day night these boys and girls have given their life so I can shine bright on screen. @abhivarman just smiling cause he thinks I’m craY and @aliaabhatt with zero sleep and an Injury giving her 100 percent #teamkalank. We coming to u in 2019 get ready. April 19 th. Also I got my #pizza

When an actress who gave us empowering films like Kya Kehna? And Chori Chori Chupke Chupke in the early days of her career, it hurts to see her play a character as badly written as Sapna Dubey. Head over to the link in our bio to read @piikkkuuuu’s entire review of #BhaiajiSuperhit… @realpz